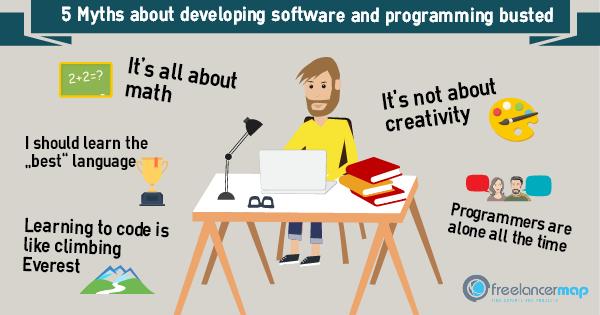 What are the top 10 most insane myths about computer programmers?

Programmers are often seen as a eccentric breed. There are many myths about computer programmers that circulate both within and outside of the tech industry. Some of these myths are harmless misconceptions, while others can be damaging to both individual programmers and the industry as a whole.

Here are 10 of the most insane myths about computer programmers:

Another Top 10 Myths about computer programmers  in details are:

This couldn’t be further from the truth! Programmers are some of the hardest working people in the tech industry. They are constantly working to improve their skills and keep up with the latest advancements in technology.

While it is true that programmers don’t need to be extroverts, they do need to have strong social skills. Programmers need to be able to communicate effectively with other members of their team, as well as with clients and customers.

Myth #3: All programmers are nerds.

There is a common misconception that all programmers are nerdy introverts who live in their parents’ basements. This could not be further from the truth! While there are certainly some nerds in the programming community, there are also a lot of outgoing, social people. In fact, programming is a great field for people who want to use their social skills to build relationships and solve problems.

Myth #5: Anyone can learn to code.

This myth is particularly damaging, as it dissuades people from pursuing careers in programming. The reality is that coding is a difficult skill to learn, and it takes years of practice to become a proficient programmer. While it is true that anyone can learn to code, it is important to understand that it is not an easy task.

This myth is simply not true! Programmers use math every day, whether they’re calculating algorithms or working with big data sets. In fact, many programmers have degrees in mathematics or computer science because they know that math skills are essential for success in the field.

Myth #7: Programming is a dead-end job.

This myth likely comes from the fact that many people view programming as nothing more than code monkey work. However, this could not be further from the truth! Programmers have a wide range of career options available to them, including software engineering, web development, and data science.

Again, this myth likely comes from the outside world’s view of programming as nothing more than coding work. In reality, programmers often work on multiple projects at once. They may be responsible for coding new features for an existing application, developing a new application from scratch, or working on multiple projects simultaneously as part of a team.

Myth #9: Programming is easy once you know how to do it .

This myth is particularly insidious, as it leads people to believe that they can simply learn how to code overnight and become successful programmers immediately thereafter . The reality is that learning how to code takes time , practice , and patience . Even experienced programmers still make mistakes sometimes !

This myth likely stems from the fact that many successful programmers are self-taught . However , this does not mean that formal education is unnecessary . Many employers prefer candidates with degrees in computer science or related fields , and formal education can give you an important foundation in programming concepts and theory .

Myth #11: That they put in immense amounts of time at the job

I worked for 38 years programming computers. During that time, there were two times that I needed to put in significant extra times at the job. The first two years, I spent more time to get acclimated to the job (which I then left at age of 22) with a Blood Pressure 153/105. Not a good situation. The second time was at the end of my career where I was the only person who could get this project completed (due to special knowledge of the area) in the timeframe required. I spent about five months putting a lot of time in.

Some programmers may need to know advanced math, but in the areas where I (and others) were involved with, being able to estimate resulting values and visualization skills were more important. One needs to know that a displayed number is not correct. Visualization skills is the ability to see the “big picture” and envision the associated tasks necessary to make the big picture correctly. You need to be able to decompose each of the associated tasks to limit complexity and make it easier to debug. In general the less complex code is, the fewer errors/bugs and the easier it is to identify and fix them.

No, we don’t. We know approximate part of the program where the problem could be. And could localize it using a debugger or logs – that’s all.

Myth #14:  Everyone could be a programmer.

No. The ease of implementation is defined by model used inside the software. And the thing which looks simple to business owners could be almost impossible to implement without significantly changing the model – which could take weeks – and vice versa: seemingly hard business problem could sometimes be implemented in 15 minutes.

Myth #16: Please fix <put any electronic device here>or setup my printer – you are a programmer!

Yes, I’m a programmer – neither an electronic engineer nor a system administrator. I write programs, not fix devices, setup software or hardware!

As you can see , there are many myths about computer programmers circulating within and outside of the tech industry . These myths can be damaging to both individual programmers and the industry as a whole . It’s important to dispel these myths so that we can continue attracting top talent into the field of programming !